Elite Precast Concrete celebrated the official opening of its new state-of-the-art facility by welcoming an MP and industry Chief Executive. 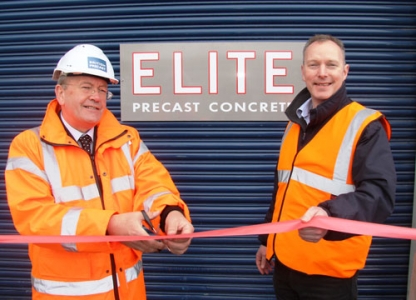 The Member of Parliament for Telford, David Wright, and British Precast Concrete Federation Executive, Martin Clarke were on hand to unveil the Telford-based concrete company’s new 23,000 square feet of manufacturing, workshop, and office space, giving the firm’s site a total capacity of around 48,000 square feet.

In addition, Elite Precast Concrete has also taken on an additional 1.5 acre yard, with the move a crucial building block in the business’s future growth plans, which includes increasing its presence in international markets such as Holland, Germany and the Middle East.

Founded in January 2008 by Directors Richard Doody and Alan Johnson, and employing around 40 staff at its current site, the company has grown to become the UK’s market leader in the manufacturing of interlocking ‘V’ and ‘Lego’ precast concrete blocks, which are used by local authorities and recycling businesses nationwide to create sturdy waste storage bays. The blocks are also used in sectors such as road and rail transport, where they act as a robust form of embankment retention, and hospitality, outdoor events, and construction, where they are utilised as kentledge – a temporary counterweight – to hold scaffolding, security fencing, and marquees in place.

As well as carrying out the official opening ceremony of the new site, Mr Wright MP and Martin Clarke joined a number of selected guests on a guided tour of the facility led by Owen Batham, Sales and Marketing Director of Elite Precast Concrete.

“This is a significant day for our company,” Owen Batham, explained. “Thanks to everyone’s exceptionally hard work, we now have the rock-solid foundations in place to capitalise and expand our business even further. The last 12 months have been a particularly successful period, which even saw 20,000 of our blocks used as kentledge to hold almost 30km of perimeter fencing in place across 60 of the venues used in last summer’s Olympics, including the Olympic Park and Stadium in Stratford.

“One of the more remarkable aspects of our growth over the last year is that turnover has significantly increased despite many of our customers coming from the construction industry, which of course, has been one of the hardest hit by the economic downturn.”

Martin Clarke, Chief Executive of the British Precast Concrete Federation (BPCF), said: “I am absolutely delighted to be part of this special occasion and to see one of our much-valued members achieving such success within the industry.  One of the core aims of our organisation is become the most environmentally sustainable and safest sector in UK construction, and with the work that Elite is doing to encourage the use of sustainable production solutions, we are well on our way to fulfilling this ambition.  We offer our huge congratulations to the team at Elite and are confident that this business growth will further enhance their success.”

In addition to its turnover triumph and facilities expansion, the last year has seen Elite Precast Concrete team up with finance broker Kata Crushing & Recycling Finance to launch a first of its kind in the industry package that enables customers to buy interlocking blocks using competitively priced finance, while the firm’s environmentally-friendly production processes and use of advanced online sales techniques saw it scoop the Innovator category at the inaugural West Midlands Business Masters Awards.