Using a ‘Lego wall’ to avoid a disruptive all-line block

The engineers delivering the Cardiff Area Signalling Renewals Project used an innovative ‘Lego wall’ to provide a solid barrier between open lines and those lines being replaced, avoiding the need for a disruptive all-line block.

The idea came from someone’s “throw-away comment” about Lego, which prompted serious thinking about the concept of a ‘real virtual wall’ and research by Network Rail that proved it was viable. 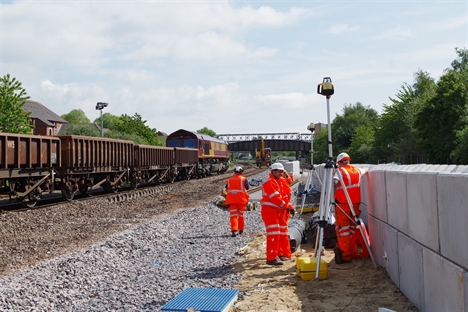 RTM asked Network Rail’s Keith Morey (CDM integration manager) and Christian Irwin (senior project manager) to explain the idea and its genesis in more detail, following its successful implementation over the late May bank holiday. They told us:

“The Cardiff Area Signalling Renewals Project (CASR) had a massive task because of a lack of access when installing two new sets of points (9034 A & B) to form a crossover on the main lines and the rest of the 9033 crossover that was installed in Christmas 2014 on the reliefs to connect onto the main lines just outside Cardiff.

“These track works needed to be completed prior to the planned East of Cardiff Signalling commissioning, scheduled for the end of June 15. The railway involved is a four-track stretch of railway but in order to utilise the large Kirow 1,200 crane to install the points and new track panels, an all-line block was needed.

“With Network Rail being the principal contractor for the works, the planning with contractors (along with the safety of operatives) were clearly in the company’s area of responsibility, tied in with the delivery and productivity of the works and the commissioning.

“The project team looked at the amount of RRV works that could be controlled in part by slew restrictors and also by virtual wall technology, but to carry out the work with lines open would need the Kirow to unload, move and slew panels that had a much higher potential to foul the relief lines. Additionally, operatives would need to work around the site and so also needed something that could more easily be used to help keep them safe as though they were working in a full possession.

“It was clear getting an all-line possession wasn’t possible because of the number of trains that were required to run or to re-plan further with the scarce resource at Easter and Christmas would again impact the signalling programme, so to meet the commissioning timescales, an alternative was needed.

“By thinking outside the box, the project team came up with the idea of a real virtual wall, from a throw-away comment about Lego.

“Measurements were calculated and stability tested and all was found to be feasible. The first section was delivered, installed at the depot and tested, passing with flying colours.

“After that it was ‘all systems go’ and the wall was assembled in the 10-foot over the required distance for the stretch of track to be replaced. This was done using RRVs and trailers utilising short midweek night possessions. The installed stretched for approximate half a mile along the route. Gauge clearances were checked and levels tested to monitor for movement but all was sound – the project had the real virtual wall.

“This in turn allowed the CASR team to produce (in collaboration with Balfour Beatty Rail) a plan to deliver a whole crossover and link into the relief within a bank holiday weekend, utilising the two-line closure, the Kirow crane, numerous trains, RRVs with slew locks and dozers within the dig.

“Everything worked perfectly, following the carefully planned programme – everything was excavated to the required depth and within time. With all trains arriving in the right formation and on time, the planning showed its worth, with hand-back achieved 60 minutes early. 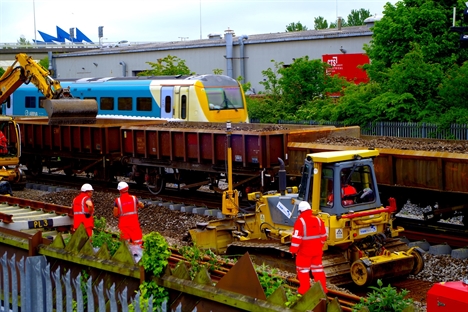 “Not only that, but the main services had still been able to run on the reliefs while the mains were being worked on, so the train operators – Arriva, First Great Western and CrossCountry – were happy, along with Freightliner, Colas, GBRF and DB Schenker, who were all able to run freight trains.

“This solution has saved an all-line possession for 72 hours; it has cut customer disruption and cut congestion in Newport & Cardiff stations. Win-wins for not only the project, but the Route, the TOCs and FOCs, and the travelling public.

“Additionally, the blocks can be disassembled and then used elsewhere for future works to again create a safe environment and access efficiencies. The project is now looking at the possibility of installing block walls near two-line RRAPS so that machines could on- and off- track without needing an all-line block. All from a child’s Lego set.” 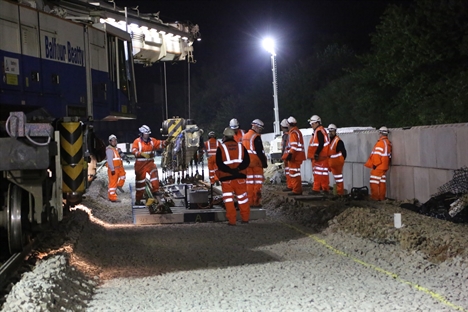 The Kirow near the wall

Owen Batham from Elite Precast told RTM: “As the largest manufacturer of interlocking blocks in the UK, Elite Precast were delighted when we were asked to get involved in this exciting and innovative project. We are very proud to have helped to ensure both the safety of the workforce and the completion of the works ahead of schedule. Our high strength ‘Lego’ blocks have an almost endless range of uses and the vision of the Network Rail engineers in choosing our product means that we are able to add yet another to the list.”